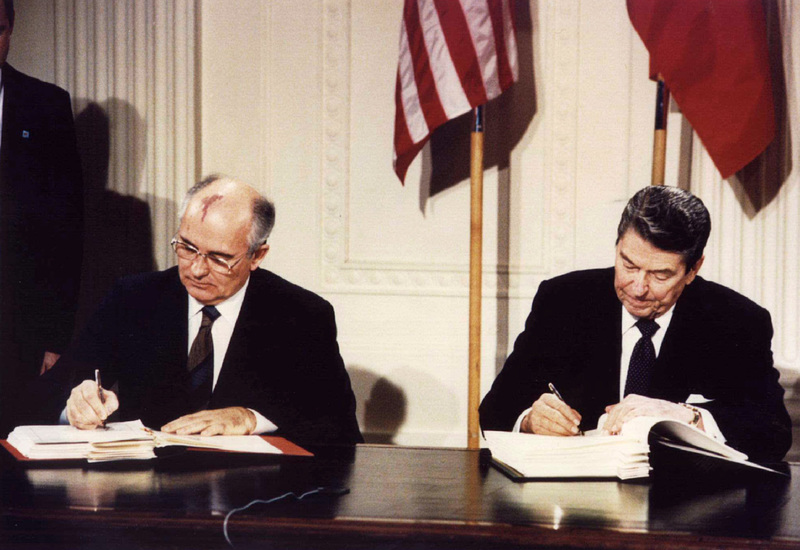 For nearly five decades, Washington and Moscow have engaged in negotiations to manage their nuclear competition. Those negotiations produced a string of acronyms—SALT, INF, START—for arms control agreements that strengthened strategic stability, reduced bloated nuclear arsenals and had a positive impact on the broader bilateral relationship.

That is changing. The Intermediate-range Nuclear Forces (INF) Treaty is headed for demise. The New Strategic Arms Reduction Treaty (New START) has less than two years to run, and the administration of Donald Trump has yet to engage on Russian suggestions to extend it. Bilateral strategic stability talks have not been held in 18 months.

On its current path, the U.S.-Russia nuclear arms control regime likely will come to an end in 2021. That will make for a strategic relationship that is less stable, less secure and less predictable and will further complicate an already troubled bilateral relationship.

Bilateral nuclear arms control talks between Washington and Moscow began in 1969 with the Strategic Arms Limitation Talks (SALT). They resulted from a growing understanding that negotiated limits on the superpowers’ nuclear arms competition served the interests of both. Over the next five decades, arms control treaties and unilateral force decisions led the sides to reduce their active arsenals to 4,000-4,500 nuclear weapons each—down from a U.S. peak of more than 30,000 in the 1960s and a Soviet/Russian peak that exceeded 40,000 in the 1970s.

Early treaties such as the 1972 Interim Offensive Agreement and the 1979 SALT II Treaty (which never entered into force but whose limits were observed into the mid-1980s) merely slowed the growth of nuclear arsenals. Later treaties had a more dramatic impact. The 1987 INF Treaty banned the entire class of U.S. and Soviet land-based missiles with ranges between 500 and 5,500 kilometers. The 1991 START Treaty required the sides to reduce their accountable strategic nuclear warheads by some 40 percent while cutting strategic missile launchers and bombers by about 30 percent.

Arms control agreements often had a beneficial impact on the broader relationship. SALT helped advance détente in the early 1970s; progress on INF and START spurred an improvement in the overall U.S.-Soviet relationship in the late 1980s; and the relatively quick conclusion of New START gave a positive impulse to the Obama administration’s reset with Russia, even though the reset proved short-lived.

Today, the U.S.-Russian relationship has hit its lowest point since the end of the Cold War. Arms control, or the looming collapse of arms control, rather than helping, may contribute to a further deterioration of relations.

The Demise of the INF Treaty

The INF Treaty is on a death course. Russia violated the treaty by developing and deploying the 9M729, a prohibited intermediate-range cruise missile. Neither the Obama nor the Trump administration employed an effective strategy to persuade Moscow to return to compliance.

On October 20, 2018, President Trump announced that the United States would terminate the treaty, surprising allies and administration officials alike. NATO subsequently backed the U.S. decision, though European officials privately grumbled about a fait accompli. In early February, U.S. officials stated that they had suspended U.S. treaty obligations and given Russia the required six months’ notice of the U.S. intention to withdraw from the agreement. Russia then suspended its treaty obligations.

The United States could not remain forever in a treaty that Russia has violated. However, the way the Trump administration handled its departure amounted to diplomatic malpractice. Washington will get blamed for the treaty’s end.

There was a smarter way. First, U.S. officials should have informed their European counterparts in early 2018 that the United States would have no choice in 12–24 months but to leave the treaty if Russia did not correct its violation and urge them to apply political heat on the Kremlin, including at the highest level. Russia’s intermediate-range missiles cannot reach the United States; they threaten Europe and Asia.

Second, the U.S. military should have deployed conventionally armed air- and sea-launched cruise missiles to the European region to show that the Russian violation would not go unchallenged.

Third, NATO should have begun a study of long-term countermeasures, with one option being deployment in Europe of a conventionally armed U.S. intermediate-range ballistic missile. While the Alliance likely could not have found consensus to adopt that option, discussing it would have reminded military leaders in Moscow how much they disliked the U.S. Pershing II, whose deployment in West Germany in the 1980s proved key to securing the INF Treaty.

Fourth, U.S. officials should have indicated to their Russian counterparts that, if they addressed U.S. concerns about the 9M729 violation, the United States would consider ways to address Russian concerns that the Aegis Ashore missile defense facility in Romania could launch offensive missiles.

Would such steps have brought Russia back into compliance? Perhaps not, but they certainly would have increased the odds. Even if they did not succeed, they would have positioned Washington far better with its allies and put it in a stronger position to lay blame for the treaty’s end where it belonged—on Russia.

In the actual event, the Trump administration hardly tried. In January, Russian officials offered to exhibit the 9M729 to U.S. experts. U.S. officials could have taken that proposal and insisted on procedures for a meaningful exhibition. Instead, they flat out turned it down.

Exhibitions of the 9M729 and Aegis Ashore facility could have opened a path to resolve each side’s compliance concerns, but Moscow and Washington have not shown the needed political will. It looks like the treaty will meet its demise in August.

Questions about the Future of New START

In contrast to the INF Treaty, Russia has complied with the limits of the 2010 New START Treaty, which required reductions by each country to no more than 1,550 deployed strategic warheads and no more than 700 deployed strategic missiles and bombers by February 2018. The United States also met the limits, though Russian officials question the adequacy of measures the U.S. military took to remove some strategic systems from treaty accountability.

New START by its terms will expire in February 2021, though the treaty allows extension for up to five years. Russian officials have proposed discussion of extension. In 2017, Trump administration officials said they would first have to complete the new nuclear posture review and see whether Russia met the February 2018 limits. Both of those boxes were checked more than a year ago. U.S. officials now say they are studying the question and see no rush.

New START extension should be a no-brainer. First, it would extend to 2026 the limits on Russian strategic forces and provide a mechanism to address new nuclear systems that the Russian military has under development. Second, extension would not affect U.S. strategic modernization plans, which the Pentagon designed to fit within New START’s limits. Third, extension would continue the flow of information that the U.S. military and intelligence community receive about Russian strategic forces from data exchanges, notifications and on-site inspections. That information lets the U.S. military make smarter decisions about how to equip and operate U.S. strategic forces.

When asked about extension, however, Bolton has raised two alternatives: renegotiation of New START or a treaty modeled on the 2002 Strategic Offensive Reductions Treaty (SORT). Neither holds much promise.

Renegotiation would allow Washington to try to improve New START, perhaps with additional verification measures or expanded limits to capture nuclear weapons not now covered by the treaty. But Moscow would seek changes as well, starting with limits on missile defense and conventional strike systems, both of which are anathema to the Trump administration. Renegotiation would take a long time and have, at best, an uncertain prospect of success.

Bolton opposed New START when the Senate discussed its ratification back in 2010. Neither Secretary of State Mike Pompeo nor Acting Secretary of Defense Patrick Shanahan seem to be advocates for the treaty. Although extension would be very much in the U.S. interest, the Trump administration appears inclined to let it expire.

U.S. and Russian officials in the past have held strategic stability talks to take a broad look at developments that affect their strategic relationship. Such talks are useful, particularly when new developments, such as those in the cyber and space domains, emerge and when Russian nuclear doctrine has provoked concern in Washington and led to changes in the U.S. nuclear posture. Even if strategic stability talks do not spin off specific negotiations, they provide a venue for the sides to exchange views and better understand the concerns of the other.

During the Trump administration, a one-day session of strategic stability talks took place in September 2017. As of March 2019, it has not agreed to a second meeting.

For most of the five decades of U.S.-Soviet/Russian arms control negotiations, the American side took the lead. Moscow often struck a pose not of disinterest, but of less interest—likely for bargaining purposes. That is no longer the case. The Kremlin now faces a White House that attaches as little priority to reducing arms as it does—perhaps less. The U.S. President evinces no understanding of arms control, while his national security advisor apparently seeks to end it.

With the INF Treaty all but dead, New START’s fate uncertain after 2021 and no sign of new initiatives on either side, arms control as practiced for some 50 years may be coming to an end or, at a minimum, to a pause. That occurs at a time when Russia and the United States have significant nuclear modernization programs underway. While the bulk of those programs aim primarily to replace old weapons with new ones, the sides are also developing nuclear capabilities that neither previously had in its arsenal. Economic constraints may limit an all-out arms race, but the strategic nuclear relationship seems headed for uncharted territory.

The end of the U.S.-Russian nuclear arms control regime would have wider impacts. If the two nuclear superpowers no longer are reducing—and no longer limiting—their nuclear arms, what credibility will they have to insist that other countries, such as North Korea, forgo nuclear weapons or that third countries sanction proliferating states? Will China decide to adjust its nuclear posture and move from its current modest stockpile of under 300 weapons toward a larger and more diverse arsenal?

The current course will lead to a less stable and secure world. The United States and Russia will be less able to predict future developments on the other side and thus will have to make expensive worst-case assumptions. It will make for a more complex and dangerous relationship. Perhaps then they will recall the lessons of the 1960s and 1980s that arms control, however imperfect, can offer a useful tool for managing great power competition.

Ambassador Steven Pifer is a William J. Perry Fellow at Stanford’s Center for International Security and Cooperation and a retired Foreign Service officer. He served as U.S. Ambassador to Ukraine from 1998 to 2000 and as Deputy Assistant Secretary of State in the Bureau of European and Eurasian Affairs from 2001 to 2004.