Engaging the Swiss on Apprenticeships: Economic Diplomacy with Results Back Home

Why Read this Article:

If, by the end, I’ve achieved any of these goals with you and you want to follow-up, please reach out to me via the United States Embassy in Bern: ambassadorch@state.gov. Here goes.

One of the core priorities for the State Department and for the Obama administration overall is shared prosperity because, as Secretary Kerry frequently points out, “Economic policy is foreign policy.” The United States firmly believes that, by growing bilateral economic ties, the United States as well as the host country will prosper. The metrics around our economic relationship with Switzerland are a perfect example of that: Switzerland is one of the top ten foreign direct investors in the United States and number one in research and development; the United States has been the largest growth market for Swiss exports over the past five years; and Swiss companies generate almost half a million jobs in the United States—really great jobs with an average salary of $100,000 per year. With those ties in mind, I set out to meet with Swiss companies of all kinds to understand how they do business in Switzerland and how to deepen their investment in the United States. What I learned in the course of that exploration will, I believe, profoundly and positively affect both countries economically, and also have a positive effect on the world.

The Suzi LeVine of May 2014, frankly, thinks that the Ambassador LeVine of 2015 is a bit of a heretic. When I left Seattle, I thought…no—I KNEW—that, to be a success, one needed to have a college degree (with rare exceptions like Mark Zuckerberg, Bill Gates, and a few others). Now, after digging into the Swiss education system for more than a year, I know that there are many paths to success and not all include college—or even high school—diplomas.

Let me explain by first telling you about Christian, whom I met in January during a corporate visit. He started as a teenage ne’er-do-well who didn’t really like school and who was headed toward failure. But then he began an apprenticeship at Firmenich, a multi-billion dollar company that produces flavors and scents for some of the world’s top brands. This position imbued him with responsibility, maturity, and knowledge. He discovered his love of and ability in chemistry and subsequently went to university and obtained a Ph.D.—all while still working at Firmenich. Ultimately, he rose to become the senior scientist there. Now, not only is he improving the balance sheet of the company, he’s improving the world because he is presiding over a project with the Bill and Melinda Gates Foundation to decrease disease by improving the smell and, therefore, the usage of sanitation systems.

His is one of many stories in Switzerland, a country in which two-thirds of students choose apprenticeships instead of going to academic high schools, which are reserved for those headed to university. This model has contributed to an approximately 3.2 percent youth unemployment rate and the sixth-highest GDP per capita in the world. It also contributes to an incredibly well-trained workforce whose professional lives start as young as 14, when students start scouting and applying for potential apprenticeships.

The characteristics within the Swiss apprenticeship system that make it work include:

In the Swiss funding model for apprenticeships, 60 percent of the costs are borne by the businesses for apprenticeship training and practice, 30 percent by the Cantons (states) for teaching institutions and quality control, and ten percent by the Federal government for certification and quality management.[1] The return on investment for businesses can come as early as year one, but certainly by year three, and the overall ROI averages ten percent over three years and seven percent over four years.[2]

In the United States, we have millions of jobs—from software developers to mechanics—going unfilled for lack of skills. At the same time, we have thousands of college graduates finishing with a degree, no job, a lot of debt, and no skills. Those facts are part of why President Obama kicked off a new push around apprenticeship, jobs, and skills development in his 2014 State of the Union address.

In the Fall of 2014, I was inspired by what I saw at one Swiss company—Bühler—which had, on its own, built an apprenticeship program in Minneapolis in partnership with Dunwoody Community College. I started asking other Swiss companies with major US facilities whether the labor needs in their US facilities were being met and whether they would con­sider bringing apprenticeship programs to the United States. Almost all of the companies responded positively.

Embassy Bern partnered with the Office of Apprenticeship in the Department of Labor and SelectUSA in the Department of Commerce to help guide the companies and, by July 2015, we were able to announce that 18 Swiss companies were committed to building and/or expanding apprenticeship programs in their US locations—with jobs ranging from software developer and insurance adjustor to polymechanic and robotics engineer. From the map below, you can see that these companies range from mid-size to large Fortune 100 companies with well-respected and popular brands. They represent over 100,000 jobs in the United States. 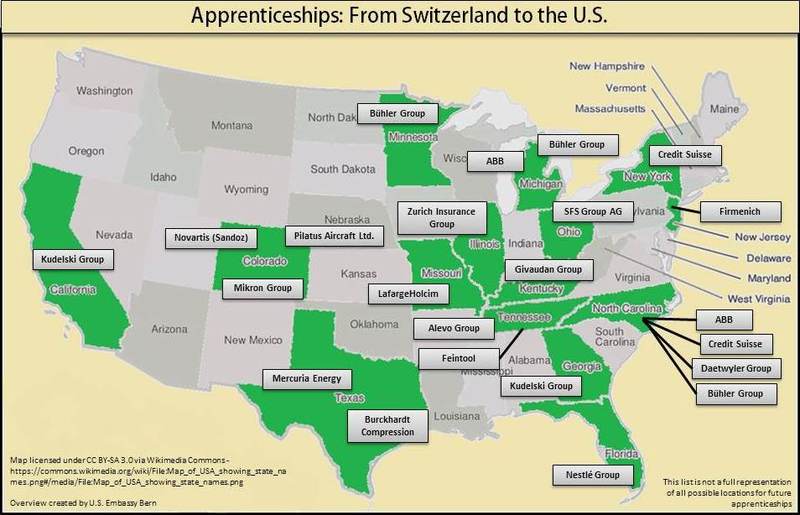 Because this model works best in a conducive ecosystem, these businesses are trying to enlist other companies from their supply chains, among their competitive set, and in their geographical region to collaborate with them in working with community colleges to create curricula and to work together to promote the idea to local guidance counselors, high school students, and parents. The most developed of these models is Apprenticeship 2000, which includes both Swiss and German companies partnering with Central Piedmont Community College in North Carolina to manage curriculum and recruit­ment for students as they leave high school.

Fundamentally, our apprenticeship focus at Embassy Bern has been on jobs in the United States. However, the Swiss are looking at the apprenticeship model as a long-term approach to countering violent extremism by providing youth with a productive purpose and inoculating them against the destructive appeal of terrorist ideology. In fact, Swiss Foreign Minister Didier Burkhalter used this concept as the basis of the speech he gave at the White House Summit on Countering Violent Extremism in February 2015.

In some countries, such as South Africa, India, and Kazakhstan, this apprenticeship model is already in motion. Elsewhere, I believe it could be a powerful engine for sustainable economic development and for preventing, as well as countering, violent extremism.

Is the Swiss apprenticeship model the perfect model to replicate everywhere? No. Even within and across the United States, it will need to be adapted. For example—rather than have it as an alternative to high school, initial adoption in the United States is more likely to be in the post-high school years. However, I do believe that the model—because it provides a path, not an end—maps well to the global dream of success that inspires youth and that parents wish for their children. But to take hold in the United States and around the world, people will need to recognize the prestige of becoming an apprentice. This, I believe, is achieved by having well-respected brands embrace the model, increasing the diversity of apprentice­ships, improving the visibility of the success that apprentices achieve in life, and promoting the path as a viable and attractive option to all students—and not just a subset of disadvantaged youth.

Over the course of this past year, I have met hundreds of apprentices. I have been universally impressed with their maturity, their confidence, their focus on quality, and their entrepreneurial spirit. An apprenticeship is not an internship or inden­tured servitude. Apprentices are working in an actual job, earning a salary, producing salable goods, and learning a company from the ground up. There is no obligation for them to work there when they’re done. Nor do the businesses have an obligation to offer them a job. That said, they frequently become the most valuable employees that any company or industry has, and it’s clear to me that the apprenticeship they choose very much provides them a stepping stone to the future.

With this program, economic diplomacy at Embassy Bern is not just about strengthen­ing investment ties between our two countries; we are boosting long-term labor markets all over the United States—from California to New Jersey, from Ohio to Texas—and potentially across the world. The work force will be more skilled, more youth will be employed, and geographical areas with these programs will be more desirable destinations for investment.