The Challenges and Opportunities of EU Enlargement

Politically, enlargement will become a reality on May 1, 2004, when eight new Member States of Central and Southern Europe—Poland, the three Baltic States, the Czech Republic, Slovakia, Slovenia, Hungary—as well as Malta and Cyprus will join the European Union (EU). However, the most important effects of the strategic decision on enlargement have already taken place: today’s Europe is a safer and better place to live in and to do business than it was 15 years ago.

Over almost half a century, European integration has helped to put an end to the conflicts of the past by strengthening peace, security, justice and well-being throughout the Western part of Europe. The fall of the Iron Curtain offered the opportunity to overcome Europe’s divisions, to heal historical injustice and to project peace, stability and prosperity to a much larger part of the European continent. The current EU enlargement process is driven by the historical experience that Europe is only a safe and prosperous place when it is uniting. Therefore, the significance of the present enlargement round cannot be overestimated. Enlargement not only promotes Europe’s interest but also provides greater prospects for peace, stability, prosperity, cooperation and justice in this world. 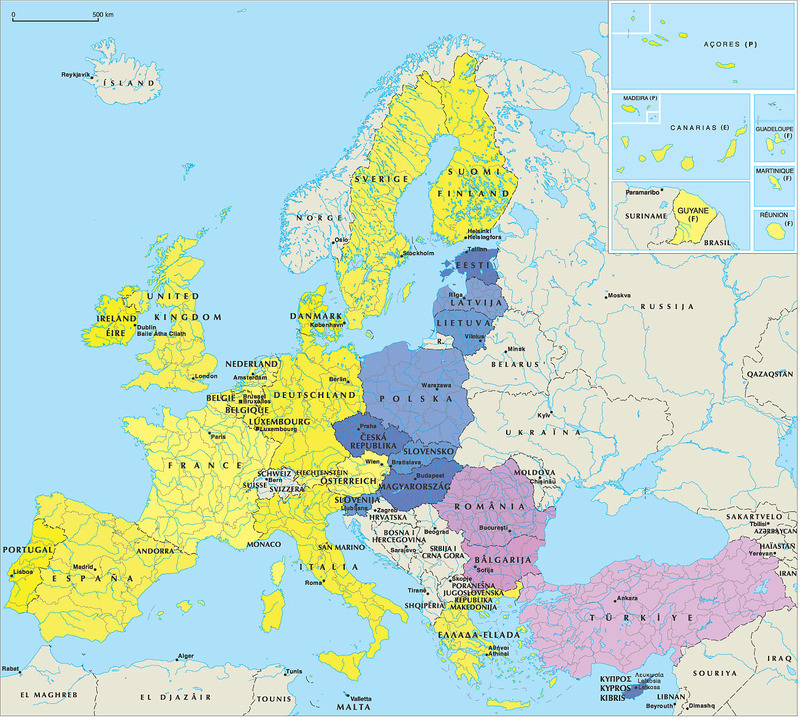 Europe has already benefited from enlargement. Since the 1993 invitation to the candidate countries to become part of the European Union, the enlargement process has already contributed decisively to achieving political stability, economic progress and social progress. Democratic institutions, changes of government on the basis of free elections, reinforced protection of human rights and market economy principles are now common features in a large part of Central and Eastern Europe. The enlarged Union, encompassing more than 450 million people, will be better equipped to master globalization and to confront global challenges. An enlarged Union will also add weight to the European Union’s external relations and further boost the need to develop a common European foreign and security policy enabling the Union to better respond to the new challenges and risks of the 21st century and to play its full role as a partner in the transatlantic relationship, which remains crucial.

Credit for the European continent’s impressive developments over the last 15 years mainly belongs to the peoples of the Central and Eastern European countries themselves. Their fight for democracy and freedom has put an end to the Cold War and led to the disintegration of the Soviet Empire. This fight has proven that dictatorship is finally unable to suppress the free will of the people and demonstrated the attractiveness and strength of the universal values of freedom, democracy and respect for human rights.

Over the last 15 years, the citizens of the acceding countries have successfully undertaken a complete system transformation, mostly on their own. To that end, they have undergone deep reforms and shouldered social burdens over years without loosing their way to the EU. Areas of conflict, such as minority issues and border problems, have been removed. These impressive reform efforts and achievements are still underestimated and should be more appreciated than is the case at the moment.

The prospect of enlargement has supported the successful system transformation in a large part of Central and Eastern Europe and has helped to create intense political and economic ties between the two parts of Europe that were formerly divided by the Iron Curtain. The political, economic and legislative conditions for accession were clearly defined from the outset, in 1993. These criteria provided clear guidance for the transformation process in the Central European countries. The prospect of EU membership has no doubt accelerated the reform process. The new Member States were tasked with meeting these accession conditions: transformation from centrally planned to functioning market economies and from communist regimes into democratic societies—both are now complete. The combination of political and economic reforms, the full implementation of the EU legislation in the new Member States and substantial EU assistance after their accession has already created a stable and attractive investment climate not only for European business but also for our partners in the world.

As a result of the hard and successful work of the future Member States, the accession negotiations were concluded at the end of 2002 and the Accession Treaty signed in April 2003. This Treaty, ratified by all Member States and acceding countries, is the legal instrument that sets the conditions of accession. Nine of the ten acceding countries decided to legitimize their accession to the EU through a referendum. As a result, more than 25 million voters expressed their clear support for EU membership for their home country thus giving this enlargement a high level of democratic legitimacy.

Following the accession negotiations, the acceding countries will fully implement all EU policies, including the Schengen system* and the common currency. Further, in monitoring the preparation plans for accession in the ten countries, it is clear that the new members will enter the EU at a very high level of preparedness. Therefore, this enlargement will not weaken but strengthen European integration.

The historical and political arguments in favor of enlargement are compelling. In addition, it will produce substantial economic and social benefits. Enlargement has been proven to be a very efficient and low-cost policy, if measured in financial terms. The budgetary cost of enlargement for the period 2004-2006 will amount to nearly 41 billion euro. In this context, it is worth noting that until 2006, the EU will provide more financial assistance per capita to stabilize the Balkan region than it will to cover the per capita enlargement costs, not to mention the potential costs of non-enlargement.

EU enlargement represents a significant growth potential. With the accession of Bulgaria and Romania, the EU will have gained another 100 million EU citizens. The further extension of the EU’s Single Market to all 12 countries will foster competition, which is likely to lead to price decreases. This will generate higher efficiencies and therefore support the potential for growth and employment.

Although their income level is still well below the EU average, the acceding countries have strong economic potential. Called the “New Eastern tigers” the annual growth rates in these countries are estimated to be much higher than the EU average until the end of this decade. Thus, the EU is integrating fast-growing markets. Per capita income will converge with the EU level over time, even if it might last only a couple more years. The high catch-up potential stems from an interaction of abundant, highly qualified labor, modernization of infrastructure and high productivity growth.

The economic integration between the candidate countries and the EU began in 1989. Due to the prospect of EU membership, this process accelerated in the mid-1990s, when the so-called Europe Agreements came into force—thus providing substantial market opening.

Trade and foreign direct investment (FDI) have been the two main channels of integration. The immediate impact of enlargement should not be exaggerated, given the already close economic ties and the relative low economic weight of the newcomers. The enlargement perspective has encouraged trade integration. As a group, these countries have become the second most important trading partner of the EU, and the EU itself represents the most important trading partner for them. Today about 67 percent of the exports of the acceding countries are directed to the EU, and 59 percent of their imports originate from the EU.

Enlargement also is an important factor in attracting foreign direct investment in applicant countries. Indeed, FDI played a major role for the successful transformation towards market economies. On average, FDI currently amounts to a volume of about 20 billion US dollars per year for all of the Central and Eastern European countries. By the end of 2002, the total stock of FDI in acceding countries amounted to more than 150 billion US dollars. In the context of transition and real economic convergence, FDI has and will continue to contribute to the replacement of outdated capital stock and to the introduction of new technology and management skills. Therefore the European Commission has underscored the need to courageously fight against corruption and to create and preserve a highly favorable investment climate in all acceding countries.

Enlargement creates a greater level playing field in Europe. It implies the full dismantling of remaining restrictions, leading to a larger Single Market with nearly 500 million consumers, where all business will compete under a common regulatory frame-work. The full implementation of Single Market rules and improved market access are expected to lead to higher efficiencies resulting from increased competition, a more efficient allocation of resources and greater specialization.

Accession also will necessitate the coordination of the candidate countries’ economic policies with those of the other Member States and progress with regard to economic and monetary convergence. The implementation of such economic policy requirements will improve economic and monetary stability in the new Member States. A wider economic area enjoying rising incomes, low inflation, fiscal discipline and sustained growth provides an excellent incentive. Greater macroeconomic stability in an enlarged Single Market will generate a favorable climate and will encourage investment from entrepreneurs.

On the other side, the present EU will profit from the acceding countries and their reform experiences, particularly in tackling the challenges of an aging population. Moreover, as a result of economic reforms, acceding countries have privatized industries and banks, liberalized markets and prices. They also have set up new administrations to promote fair competition and oversee market rules, in order to ensure the implementation of competition rules or, for example, financial markets supervision. Today, the degree of privatization and market liberalization in some sectors is sometimes higher in acceding countries than in Member States. The commitment of these countries to undergo deep reforms and the highly motivated and qualified people in the future Member States represent another asset of the enlarged EU.

The historic enlargement of the EU will not end on May 1, 2004. Two other countries, Bulgaria and Romania, are still working; their accession preparations are not yet completed and the negotiations are not yet finalized. It is the Union’s objective to welcome these two countries as members in January 2007 and assist them in achieving this goal; however, it is very much in the hands of both countries as to whether this schedule will work out.

Turkey is also a candidate country. Since it does not yet meet the political accession criteria, accession negotiations have not yet started. Presently, Turkey is undergoing an impressive reform process and the European Union is committed to help it in its efforts to successfully reform towards a full democracy with respect for the rule of law and human rights and the protection of minority rights. The European Council has already indicated that it is prepared to open accession negotiations without delay, if Turkey fulfills the political criteria, which will be assessed in autumn 2004 based on a report and a recommendation from the Commission.

The countries of the Western Balkan region also are prospective EU members. However, most countries, with the exception of Croatia, are still very far from complying with the EU accession criteria. Meanwhile Croatia has tabled its application for EU membership and the European Commission will submit this spring an Opinion on whether accession negotiations can start with this country.

These political decisions foreshadow the future developments of the EU. Today, additional enlargement rounds are not on the agenda. However, given the fundamental need to avoid new dividing lines, the EU has developed a European neighborhood policy towards its eastern and southern neighbors aimed at fostering cooperation, respect for universal values and good governance. While leaving aside the question of EU membership, the European neighborhood policy will spread democracy and prosperity beyond the borders of the enlarged EU.

* Editor’s Note: According to the European Union Web site, the Schengen system “lays down the arrangements and guarantees for implementing freedom of movement.”